Frescoes can be found in many churches in Istria, where they represent their distinct characteristic. It is a technique of painting on freshly laid lime plaster with rapid brushstrokes. The Church of St Michael over Lim houses one of the oldest frescoes in Istria and the wider region. It belongs to an earlier phase of fresco painting in Istria and to the oriental-Hellenic and Byzantine style adopted here through the efforts of the Ottonic (German) school. They were created in the 11th or 12th centuries, with significant pre-Romanesque features.

Fresco painting in St Michael over Lim can be ascribed to a distinct internationalism of the Benedictine abbey painting style of the so called Ottonic circle, both with regard to iconography and fresco painting techniques. That influence spread from the German Benedictine abbeys of Echternach, Reichenau, Fuld and later Regensburg, finding fertile ground among the local Camaldolese. Thus the church houses and develops scenes from the western iconography in the narrative sequence and realistic form, keeping to the Ottonic tradition. Influence of the Ottonic school of southern Germany is evident in the elongated figures, clothes, gestures, parts of the ornamentation, while the fresco painting expression and technique exhibit traces of the oriental-Hellenic style (fashionable paragaudion motifs, impressionist modellation, blue background, excitation of the scene). The elements of the expression of the Byzantine fresco painting were not adopted directly from Byzantium, but rather came through the Ottonic school and Italic artistic workshops who had previously adopted such motifs and techniques.

On the eastern wall of the nave (left) there used to be an image of a tonsured saint garbed in a dark habit, in front of whom a person can be seen (kneeling?). On the other side of the apse there is a well-preserve image of some bishop or monk. Below the latter there are traces of an image of a drapery, but due to the damage it is hard to tell the theme: the Annunciation or something else. 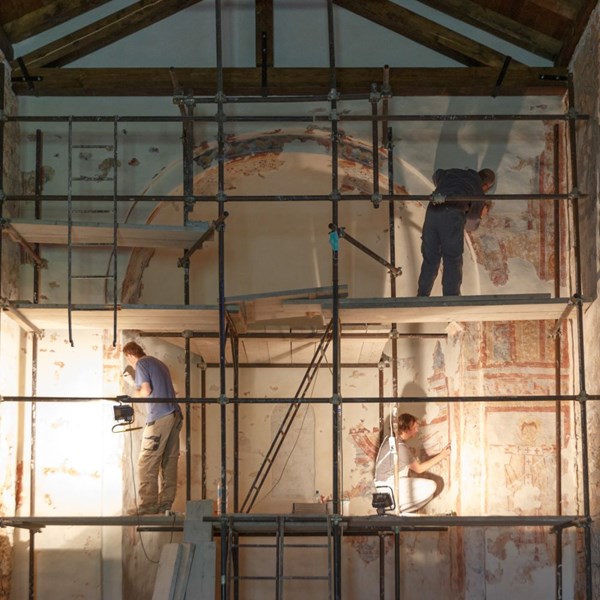 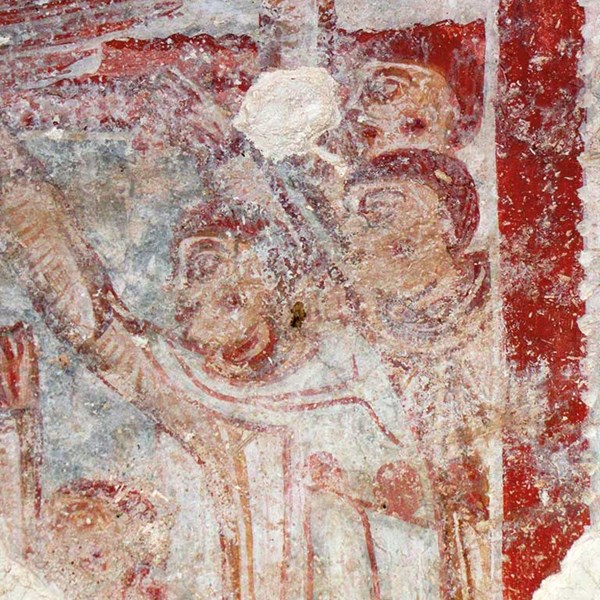 The middle part of the image is the most interesting one. It is a well-preserved image of a ruler seated on a throne with a backrest (which follows the curvature of the ruler’s back). The ruler’s head is turned slightly to the right, making the image a semi-profile. His right hand is raised in the manner of a speaker – reflecting the influence of the western trends in fresco painting – addressing the person standing beside him, who is depicted in profile view, deep in thought and with the head bowed. Two courtiers are looking at that person, standing behind the cloaked ruler. In the narrow space of the image, the characters are literally crammed together, touching the upper beam with the top of their head, while the ruler’s crown even goes above it.

The next image is a character shown in profile view, with both arms outstretched, apparently holding an open book. The image is not clear due to substantial damage. The image of another character can be discerned, with two outstretched hands and open palms as if wishing to receive the aforementioned book. There was another image alongside this one. Unfortunately, however, it has been completely ruined.

To the right of that group of images there is a monumental scene. In the middle part (almost right in the centre), there is an image of a kneeling saint with his hands outstretched towards the heavens, where rays are emanating from an angelic figure. In front of him, gesturing as if speaking, a distinguished person is sitting, with two men in short tunics standing beside him. The saint has his head turned back, toward the group of beardless men, also clad in short tunics, who hold round objects in their raised hands (some of them are upright, some of them with their backs bent, but all facing the central figure of the saint). It is probably an image of martyrdom: the beardless, tonsured saint is probably a deacon (he is wearing the dalmatic), while the rays of light and the angel imply imminent death. In that context, the distinguished person and young men represent torturers, with the distinguished person being the head torturer, the young men executioners, while the objects in their hands represent instruments of torture – almost certainly stones. The scene thus depicts the stoning of a saint (deacon), which leads to the conclusion that it is the scene of the martyrdom of St Stephen, the first martyr of the Church. Another character standing in front of St Stephen is of particular interest – it might be Saul or a false witness against Stephen, which would be a unique image of such kind. This iconographic scene can be dated to the period from the 9th until the 12th century.

The highest part of the fresco composition, located within the semi-dome, was probably painted with images of Christ and Blessed Virgin Mary, surrounded by saints or angels, among which there might have been Saint Michael the Archangel, after whom this church was named.

A special attention should be paid to the drapery with small white knots hanging from it. It was created in a simple rhythm of semi-circular edges and pointed v-shaped folds in thick ochre brushstrokes. The drapery adorns the lower part of the chancel, and has been only fragmentarily preserved. It is a motif that was common and widespread in pre-Romanesque painting.