The church was built of Vrsar stone. In 1935 it was consecrated to St Martin, Bishop of Tours.

Parish Church of Saint Martin was built of Vrsar stone.

There is a triangular gable on its façade. The church is a three-nave building with a central nave and smaller transverse aisles on each side, separated by columns. The chancel of the church is raised in relation to the floor level of the naves. The columns bear the carved names of the church donors. The Latin text on the triumphal arch of the church reads as follows: VERE LOCUS ISTE SANCTUS EST (This place is truly sacred).

The construction of a new and significantly larger parish church was first considered in Vrsar around the year 1800 since the population had increased to 500, while in 1816 it numbered 551 inhabitants. Following the approval by Francesco Polesini, Bishop of Poreč, the parish priest of Vrsar Francesco Raguzzi blessed on 1 March 1804 the foundation stone of the new parish church of Vrsar, which was to be located on the location of today’s parish church of St Martin. The first construction works began in the same year, and as early as in 1805 the walls of the church were erected to the height of 4 m, but the construction stopped after the establishment of the French (Napoleon’s) reign. Immediately upon arriving in Vrsar, the French sold all of the materials obtained for the construction of the new church. The 1820 Franciscan Cadastre reveals a cadastral plot with the construction boundaries of the church that was built more than eleven decades later, which points to the fact that all of the plans for the church construction project had been developed as early as at the beginning of the 19th century.

St Martin is celebrated in Vrsar every year on November 11th.

There were attempts to restart the church construction project in 1911 and 1912, but without success, even though there were efforts to raise enough funds. Thus, on 2 November 1912 there were 60 crowns in the coffers, and on 1 May 1913 the total funds amounted to 670 crowns. On 31 December 1913 that amount rose to 1999.21 crowns, while 2766.20 crowns had been raised by July 1914. On 1 January 1916, the deposited funds amounted to 5263.77 crowns. The nobleman Fabio de Vergottin, who died in October 1916, left 10,000 crowns for the construction of the church to the Parish of Vrsar. The turmoil of World War I stymied the planning and construction of the church.

Today’s parish church was built in 1935 of Vrsar stone, but was constructed gradually and in phases, starting from the 1920s, concurrently with the demolition of the old parish church of the same name. The construction was completed in 1934, but another year passed before the portal of the church was decorated with Vrsar stone and before the windows were completed. Therefore the church was consecrated by Bishop Trifun Pederzolli in 1935, which is taken to be the year of its construction. The church has a façade that ends with a triangular gable. According to the original plans, the façade was supposed to contain two niches (one on each side of the portal), but such a design concept was not adopted during the construction (most likely due to the extra cost for by the niches). The church is a longitudinal building with a central nave and smaller transverse aisles on each side, separated by columns. The chancel of the church is raised relative to the floor level of the naves. The names of the church donors are carved on the columns. Their capitals have ornaments in shape of flowers (palmettes with volutes).

The Latin text on the triumphal arch of the church reads as follows: VERE LOCUS ISTE SANCTUS EST (This place is truly sacred). The main altar is made of wood (brought in 2008 from the Church of St Euphemia in Rovinj). That altar was brought in due to its smaller weight since the statics of the church chancel were jeopardised following some works in the church crypt. The altar bears a new and quite large wooden statue of St Martin. The former main altar is made of stone, with a tabernacle topped by a statue of the Sacred Heart of Jesus (today it is located in the transverse aisle, to the right of the main altar). That altar was removed from the church due to its weight, being made of stone. 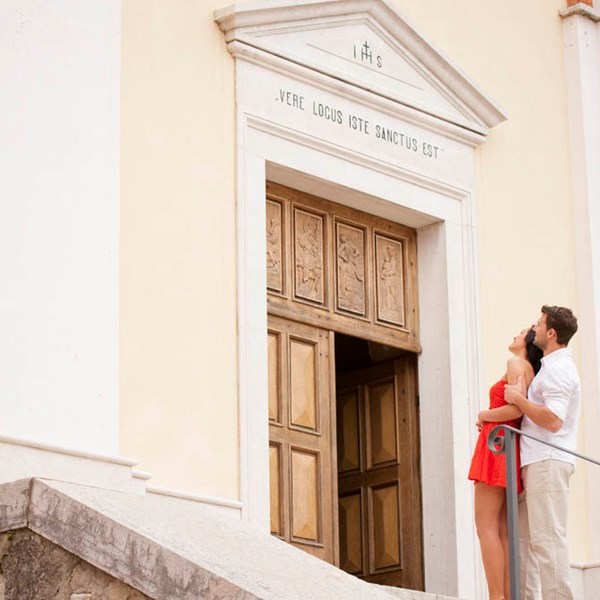 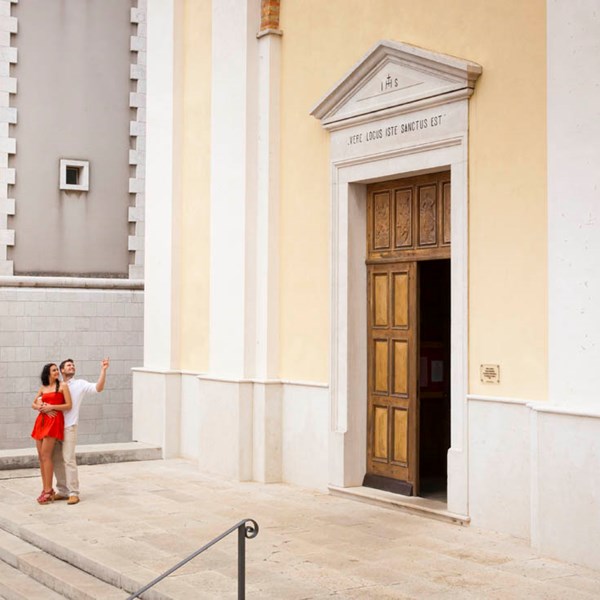 Today’s main altar is flanked by the statues of the Blessed Virgin Mary and Saint Joseph. The altar is facing the congregation. In the church there are also a marble baptismal font (from the old Church of St Martin, located by the old gate) – the upper part of which is wooden – a statue of St Anthony of Padua, a holy water font, religious paintings on the arch of the presbytery (A. Macchi) with a scene from the lives of St Martin and St Fosca, as well as a figure of Christ with outstretched hands in the middle of the arch. The church once housed a Gothic statue of Our Lady from the 14th century, but the statue has since been stolen. Below the church chancel there is a nicely furnished chapel with several old paintings hanging on the walls. It is used for liturgy during the winter months, except on Sundays.