Church of St Mary of the Sea

The church was under construction from the 4th century until the 6th century as an early Christian church with a rectangular floor plan, narthex and annexes. Later, it was restored and partitioned in the period from the 8th century until the 12th century, following Avarian and Slavic pillaging. In the Romanesque period, a three-nave basilica of Saint Mary, with a chancel, three inscribed apses, Romanesque arcades and monolithic columns was erected to the north of the early Christian edifice. It was restored in 1921 and 1969.

Starting from the 12th century the church was owned by the monks of the Lady of Mount Carmel, who, while fleeing from persecution by Arabs in Palestine, found refuge in Vrsar.

Starting from second half of the 12th century, it was owned by the monks of the Lady of Mount Carmel, who, while fleeing from persecution by Arabs in Palestine, found refuge in Vrsar. The Carmelites restored the church thoroughly in the 12th century. Next to the basilica there was a Benedictine abbey, where monks of the Order of Friars Minor resided from 1631 until 1660. The church is 23.5 m long and 12.5 m wide, and is the work of local folk builders.

The Church of the Assumption of the Blessed Virgin Mary at the Vrsar quayside is mentioned in historical sources as Mary’s Basilica. In the Romanesque period, this three-nave edifice was built in the vicinity of an early Christian complex, with a specific triple-apse system, in which every apse is inscribed (embedded) in the wall. The triple-apse system of Romanesque basilicas is connected with the remains of the back wall that can be dated to the 10th century. The church architecture on this location inherited the expression and architectural parts of the older church (the northern perimeter wall, a part of the façade, and the foundation of the southern perimeter wall), and has a special connection with them. The building is 23.5 m long and 12.5 m wide.

Each of the three naves ends with an apse. The church lacks a pronounced spatial verticality and plastic decorations on the outer side of the walls. It is characterised by a compact volume in its external appearance, especially in the structure of its external arcades. The strong monolithic columns bear the heavy arcades that stretch across large distances since the columns are fairly far apart from each other. On the eastern side, the arcades are supported by the apses in the eastern perimeter wall, and on the western side with pilasters, between which the façade wall is reinforced by double thickness. The entire architectural ambient gives the impression of being massive, hard and monumental. The capitals on the columns are simple and unadorned apart from simple and two-dimensional stylised leaves. Above the capitals there were once painted inscriptions that can be dated to the 16th century. The apse arches are profiled.

Around the church there was the oldest graveyard in Vrsar.

The church was restored in 1921 and 1969. The church floor was once paved with tombstones, one of which remains preserved in the chancel. The walls were painted with multi-coloured sacral paintings, the oldest of which were made in the 9th or 10th century. A local artist repainted the interior again in the first half of the 16th century. There are very few traces of preserved paintings: on the wall of the main apse (heads of saintly figures).

According to a 1917 source, there used to be twelve paintings in the church, each perhaps depicting one of the apostles. The basilica once housed a rich collection of artworks. Around the church there was the oldest graveyard in Vrsar. Several skilfully crafted tombstones can still be found in it. The church has a small bell-cot with a bell from the Lapagna workshop in Trieste, cast in 1922, as evidenced by the inscription on it. According to documents from the parish archive of Vrsar, it can be concluded that monks of the Franciscan Third Order built a monastery and a small seminary building (called torchio in the sources) next to the church. The seminary complex (Seminario), also mentioned in the 1820 Franciscan Cadastre as well as in late archival and cadastral documents, was originally only a building, but the name was later extended to the surrounding fields that had originally belonged to the monastery. They were owned not by the monastery, but rather the Duchy of Vrsar, headed by the bishop of Poreč. The documents from the archive further state that, when earthworks were being carried out on those surfaces, the remains of a roman spa and mosaic (later to be explored by M. Mirabella Roberti and researched in 2011) were discovered. 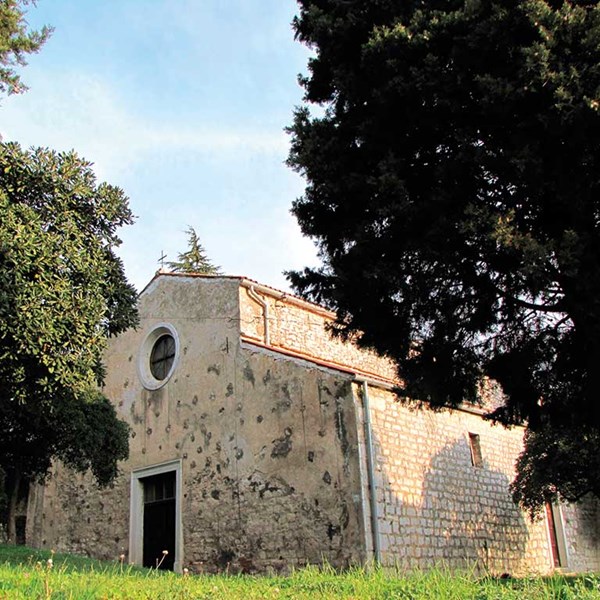 A silver chalice crafted in 1626, later transferred to the parish house, belonged to this church.

Prior to 1890, people traditionally embarked on pilgrimages to this church because the wooden statue of Our Lady was considered to be miraculous. Due to the many vows and answered prayers, it was called the Lady and Blessed Virgin Mary of Mercy. In 1917 there were three altars in the church: one consecrated to Saint Peter (on the left as seen from the church entrance), one to the Blessed Virgin Mary of Sorrow (on the right as seen from the entrance), and one which was thought to be consecrated to the Holy Cross.