Church of St Anthony of Padua

The church was built in 1656 (as evidenced by the inscription above the portal) using the local stone in the Venetian Renaissance style, while the altar was crafted in 1662 (the inscription bears the name of the artisan). The building, altar and retable were restored in 2010.

The location of the building by the Small Town Gate implies its symbolic role of the guardian of the town at the very entrance into its fabric protected by the town walls.

A large and high open porch with slender columns connected with arches (showing the Venetian influence) was added to the façade. The façade contains a small bell-cot without a bell (the small bell from 1657, adorned with images of St Antony, the Mother of God, and saints, was later requisitioned). The church houses a Baroque altar of St Anthony of Padua with a golden patina and statues of the Mother of God and Saint Anthony. On the altar there is a restored pall depicting Saint Anthony, Saint Sebastian and Saint Roche.

The Church of St Anthony of Padua is adjacent to the Small Town Gate. The year in which the church was built (1656) is carved into its lintel (I • O • B • C • F • F • C • E • L • E (e) • I • 6 • 5 • 6). The Church was built after the Uskok War (1615-1618) and the great plague epidemic in Istria (1632), when the bishop of Poreč lived in the Vrsar Castle all the time. The church was built and then managed by the brotherhood of St Anthony of Padua. The location of the building by the Small Town Gate implies its symbolic role of the guardian of the town at the very entrance into its fabric protected by the town walls. The church appears without exception in the records of the church property as well as in visitation documents kept at the Diocesan Archive in Poreč and the parish archive in Vrsar. The church was recorded in the Franciscan Cadastre of 1820.

It is a small, rectangular, single-nave church with a single altar, built of the local limestone in the elegant style characteristic for the Venetian Renaissance. In front of the church there is a spacious and high porch with slender and elegant columns whose tops are connected with arches reflecting the Venetian architectural influence. On the church façade there is a small bell-cot, from which a bell with images of Saint Anthony of Padua, the Blessed Virgin Mary, and saints used to hang in 1657. However, the bell was requisitioned in World War I. The Municipality of Vrsar restored the church in 1914. The porch was originally open, without a door, but a door was later placed in order to prevent children from playing with a ball inside. 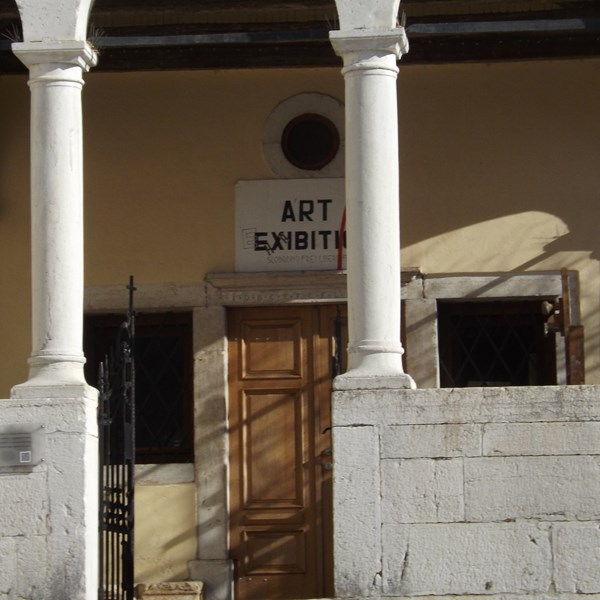 The church houses a wooden, Baroque, and richly decorated altar, whose surface gives the impression of being gilded and with Baroque splendour. On the altar there is a pall painted with oil, depicting the Mother of God with the Child, Saint Anthony of Padua, Saint Sebastian and Saint Roche. The images are the work of an unknown painter from the 17th century. On each side, flanking middle image on the pall, there is a niche. It is a southern architectural type of an altar extension. The middle field of the predella bears a carved tablet with a volute and the following inscription: FECE INDORAR BASTIAN CORNACH(in) DEL SUO PROPIO, while the flanking fields contain carved tablets with a volute and inscription of the year 1662, which can be used to date the altar reliably. The niche on the left (when looking from the altar towards the door) contains a statue of St Francis of Assisi, who holds a crucifix in his hand, while the other niche (on the right) contains a depiction of the pregnant Mother of God who is trampling a dragon beneath her feet. It is a very rare depiction of the Blessed Virgin Mary in the late stage of pregnancy. Below the altar pall there is an inscription bearing the name of the artisan who crafted the altar retable, with the year 1662, which can be used to date it reliably.

The church was thoroughly restored in 2010.