Abbey complex of St.Michael above Lim

The Benedictine Abbey of St Michael above Lim was founded at the beginning of the 11th century. St Romuald, the founder of the Camaldolese order, also resided in it for some time.

One of the most intriguing ambiental and architectural complexes in Istria are the ruins of the abbey complex of St Michael above Lim, located in the settlement with a distinct name –Kloštar. The complex includes the surrounding area, which was once abbey property, and the famous Kontija forest area. The locations of the old Benedictine abbeys here and elsewhere in Christendom were carefully chosen, being, without exception special areas in terms of ambiance, geography, micro-climate, landscape etc. St Michael above Lim too fits in such a picture: it is situated on a karst plain above Lim, has two old churches, extremely valuable frescoes, a ruined abbey complex with a cloister, water cistern, watchtower, estate, quarry and forest expanse. The contemporary settlement of Kloštar is but a hundred metres away from the complex.

Benedictine abbeys were crucial in the formation of the Western civilisation; therefore St Michael above Lim should be examined in that wider context and universal meaning. The Benedictine order is the oldest monastic order in the West. Their abbeys were the first centres of literacy and baptism, hubs from which the Latin language was spread and where the Roman law tradition as implemented in canon law was kept. Benedictine abbeys were the heralds of medieval times and, just like St Michael above Lim, important economic units with vast estates and accompanying vassals and serfs. Benedictine abbeys are immeasurably valuable for the economic history of the Middle Ages – not only as places where vassals and/or serfs worked for a living, but also as centres of technical and technological innovations in agriculture (fertilisation, eradication of diseases, vineyard planting, production of wine, the oldest wine cellars and related techniques etc.).

The Benedictines administered the abbey and its estates up until the 18th century.

The abbey complex is situated on the old Croatian cemetery destroyed by its construction. The abbey titulary – St Michael the Archangel – is the symbol of the victory of Christianity over paganism, and suggests missionary work of the newly arrived Benedictine monks among the Slavic population. The foundations of the western wall of the Church of St Michael are connected with the walls of the abbey located in its extension on the other side. That wall and its adjacent walls show signs of partitioning. Those are the remains of the abbey building, which was built simultaneously with the church (at the end of the first half of the 11th century).

The abbey titulary – St Michael the Archangel – is the symbol of the victory of Christianity over paganism.

At some point in the 13th century, the southern wing of the abbey building was erected, rising towards the courtyard (cloister) on several arches of suitable size. The columns on which the arcades rest have square capitals. The passage with a semi-circular arch and the break in the wall on the eastern side of the arches indicate that there was another cloister wing with several arcades in front of the church, and only with a roof portico, without living quarters. On the western side there was another wing of the abbey building, together with the cloister arcades, but it was demolished when the Neoclassical manor was being built. Two arches of those arcades are built in as transverse arches of the early medieval vault of the early Christian Church of St Mary. Two plutei originating from the church furniture of the Church of St Michaels, which are embedded on the transition from the pilaster to the transverse arch in the older Church of St Mary, prove that the aforementioned transverse arch of the arcade of the cloister came to the small Church of St Mary after the Church of St Michael was abandoned, after which it was emptied of its church furniture. The middle part of the cloister contains the top part of the old water cistern in the Romanesque style. Its Romanesque wreath is nicely profiled, with a stylised carving of the coat of arms of the Camaldolese, depicting two doves drinking from a chalice. In the 16th century, there was a bell tower in the cloister. However, it was later demolished, and does not exist today. 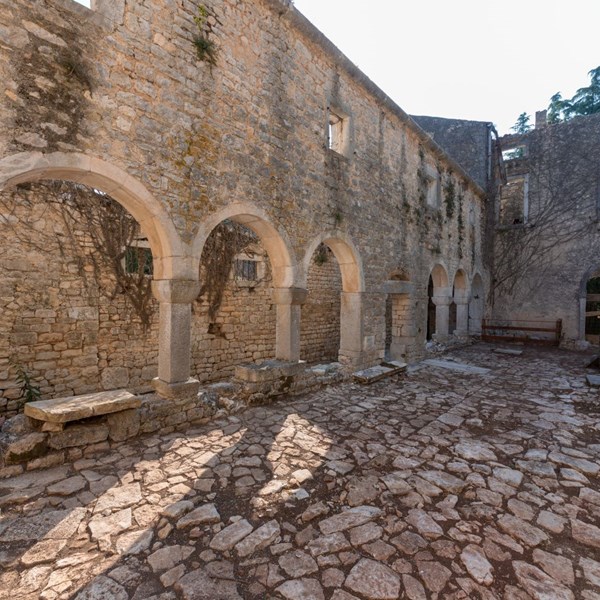 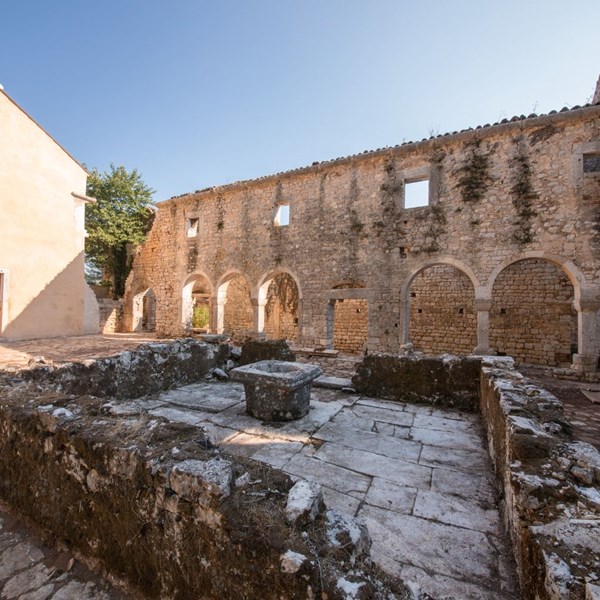